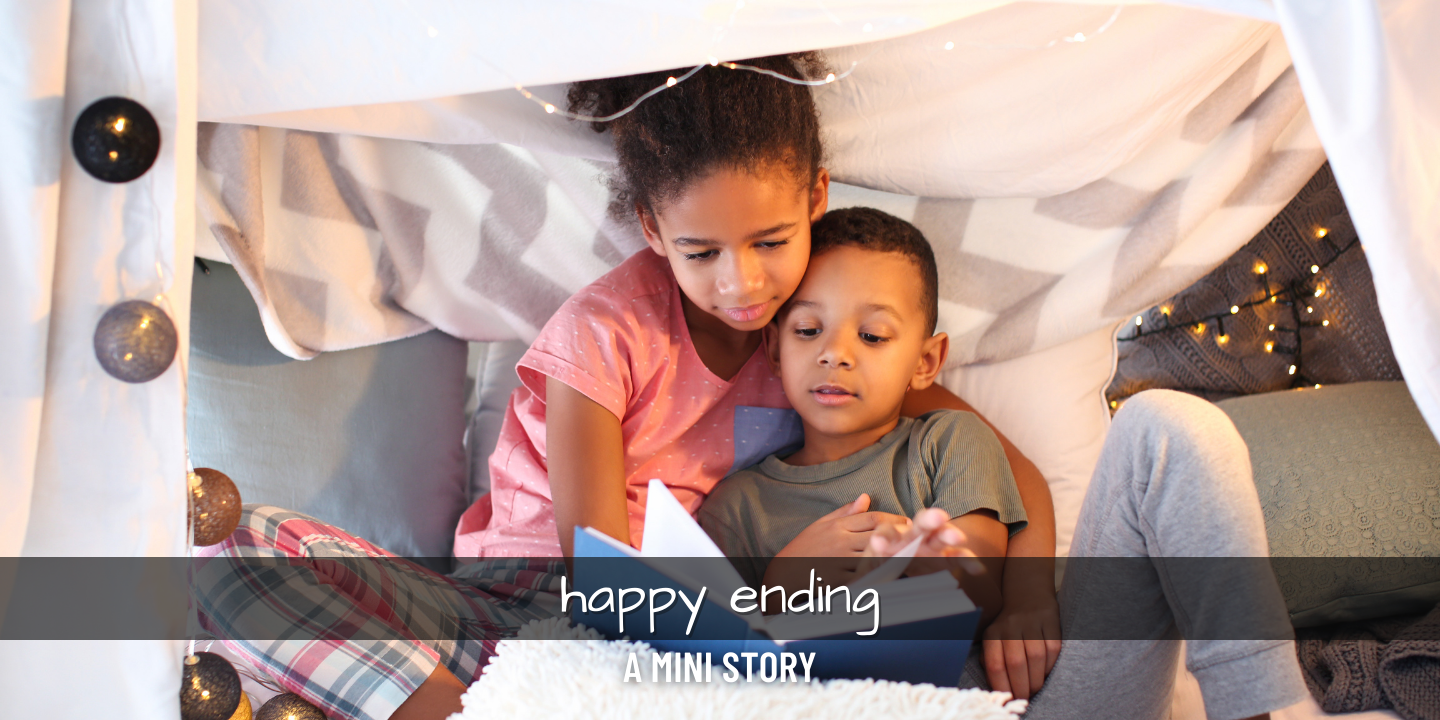 Candace narrowed her eyes at her little brother. “Kit, be quiet. We’re supposed to go to bed.”

Kit, four years younger and infinitely more obnoxious at only seven, peeked over his quilt at her. It was hard to see him in the nighttime shadows of their bedroom.

“I told you not to call me that,” she hissed at him, embarrassed even with just the two of them.

“And I don’t care, just be quiet. I want to visit the aquarium tomorrow, don’t you?”

Kit nodded, and for a couple minutes he was quiet. Then, lower than before, he whispered the words to some dumb kid song again. Candace sat fully up this time. “I’ll tell Uncle Bruce you’re talking if you don’t shut up.”

Candace kept glaring at him while she asked, “What’s up, anyway?”

Candace cut her eyes to the door, then gave him a serious look. “Be quiet, I told you. What movie was it?”

“I don’t remember the name.” Kit pushed his blanket down further and sat up. “There were a bunch of clowns though. They lived in this town, and a kid was their birthday guy, except he was really sad, and then—“

“He left it unlocked.”

Candace stared at him. A brief internal struggle between her natural obligation to lecture her kid brother and her deep-seated curiosity resulted in her saying, “You shouldn’t have done that. I bet it wasn’t that scary, though.”

“It was too,” Kit said. “A bunch of clowns got killed! It had a lot of blood, and now I can’t sleep! The bad guy was actually just a kid halfway in the movie and it showed that the clowns kidnapped him then. What if…”

He trailed off and looked between their window and their closet.

Candace almost laughed, but when she looked at the closet, she suddenly remembered two years earlier when she’d made her dad put a night light in it after seeing some cartoon movie about monster portals.

She didn’t need it now, so they kept the closet door closed. As she stared at it, Candace remembered why it had scared her. The doors were really tall. Of course,she was older now, so it wasn’t so scary… but she kind of wanted that night light now. For Kit.

“I didn’t watch the end,” Kit told her. “I got too scared, and now I keep thinking maybe the clowns are kidnapping others. Candy, could I sleep with you?”

“No! You still wet the bed sometimes!” She gave him an indignant look, but when she saw his crestfallen face, she relented a little. “But you can come sit with me a bit. Just until you’re tired.”

Kit was out of his bed in a flash, a brief blur of a boy in green pajamas, about to pounce on her bed. When he got there, she drew her special blanket back behind her. Just in case he fell asleep.

“There’s nothing to be scared of,” Candace told him. “It was make-believe, Kit. Just pretend.”

“It wasn’t,” Kit said. “It was real people, and it said at the start, it was in a town in Alaska, and that’s an actual place.”

She thought about explaining actors to him, but didn’t want to argue, so instead asked him, “So you didn’t see the ending?”

“You didn’t watch it! I know because it was only at the beginning. If you had, it would have been at the end or had the check mark.”

“Fine,” Candace said. She glanced at the closet and wished again that it was open. “I didn’t watch it, but I wouldn’t be scared. You know why?”

“It’s a movie, Kit. In movies, there are always happy endings. Do you know what a happy ending is?”

“The End,” he suggested.

“Sort of,” Candace said. “It’s like… well, even in grownup movies, there are heroes. They just aren’t always super heroes, so kids don’t know. And the rule is: good guys always win.”

“Yeah,” Candace said. She scooted into him so he’d shove over some. Once he had, she plopped beside him. “That’s how movies work, silly. Everyone knows that. Bad guys lose, good guys win everything.”

“But there were no good guys,” Kit said, lower lip trembling.

She put an arm around him. “Every story has good guys. It’s just sometimes kids don’t understand because of nuance. That’s what Uncle Bruce told me. I bet I even know how that dumb movie ended.”

“So? Uncle Bruce also said if we don’t like something, we get to change it. Just do that.”

Candace sighed dramatically as she tried not to feel too touched by the request. She smoothed his hair like she’d seen her mom do. “Okay. Well, I don’t have to do the start because you saw it. So tell me the last thing that happened.”

“James was chasing down a clown to kill. He just found out about being kidnapped, too, so he means it this time,” Kit said. “That’s what he said in his letter he sent to the news.”

“Okay, lay down. You’ll move when I’m done,” Candace said. Once he had, she thought for a moment before beginning, “The clown running away got into his car—“

“It’s small but tons of clowns fit in it,” Kit said.

“Shhh,” Candace said impatiently. “Okay, he got into his itty bitty car but by himself, and he started driving away. Of course James knew he would and had a motorcycle ready.”

“He doesn’t have a motorcycle!”

Candace gave him a knowing look. “It was a surprise, Kit. He hid it beforehand. He got on the motorcycle to chase the clown. But they both had to cross a bridge to get to the real world where people weren’t clowns. Halfway across, James saw a boy.”

“It’s okay,” Candace told him. “James doesn’t hurt kids like him. He stops instead and asks the boy why he’s on the bridge because he’s not a clown.”

“Well, the boy tells him, it’s because in his sleep he dreamed about the land of clowns and besides, if he goes there and meets them, he can remember.”

“That’s what James asked, too!” Candace confided. “He was confused and also he felt bad since he’d killed the clowns the boy wanted to see. He tried to tell the boy to go home, so he wouldn’t gt scared when he saw the bodies, but the boy shook his head and told James that wasn’t true, and he could prove it.”

“You watched the first part,” Candace said. “But that was a trick, Kit. Movies love tricks! The boy told James that too, and he said that clown land was only just memories that people forgot, and they actually just go there to remember. James didn’t know it, but he was only there so he could remember what happened too — that they had kidnapped him. But he got mad and hurt the clowns because he didn’t understand. But the clowns were only memories, and even if you can be mad at a memory, you can’t hurt it.”

Kit reached for her blanket.

“James didn’t believe him,” Candace said. “So the boy took his hand, and he led James back in. When they stepped off the bridge, there was a flash of light that blinded them. Then it went away, and everything was back to how it started. A whole land of clowns, with all the ones he’d hurt alive again and perfectly fine. But this time, James knew who they were right away.”

“Who were they?” Kit asked.

“His family,” Candace said. When Kit looked confused, she explained, “See, when he was very little, everyone in his whole family was cursed and turned into clowns who had to live on the land across the bridge — everyone but him. His family was worried he’d forget all about them, so they kept coming back and kidnapping him. Once James realized this, he was really happy. The clowns took him and the little boy everywhere in the land and they got to celebrate Christmas, and all the birthdays, and everyone had a good time. Then James had to go home, but he knew he could always come back and they’d be waiting.”

“Tell me about clown land. What did he see there?” Kit asked.

Candace laid down next to him. She described the games they played over dinners of cotton candy, and how some clowns took him fishing, and how they played home movies. At some point, Kit fell asleep, but she kept talking anyway, long into the night.

When Uncle Bruce woke them up the next day, they were both sleeping well. Candace helped Kit brush his teeth, and they got in Uncle Bruce’s car and he drove them to get pancakes. Afterward, they stopped by the double tombstones, laid some flowers, sang, and then he drove them to the aquarium.

When Candace stopped at the door, Uncle Bruce gave her a reassuring look. “It’s all right.”

“We always came for her birthday,” Candace said. “Daddy said this is where they had their first date, so our family started here. I don’t want to go without them.”

“Come on Candy,” Kit said. “I want to see their favorite tanks again.”

Candace looked at him. He was so small still, he might not remember on his own. “It hurts though.”

He took her hand. “It’s okay. We’re good guys, right? We get the happy endings. Come on, it’s Mom’s birthday. I want to feed the fish for her.”

“All right,” Candace said, smiling despite herself. Together, they went inside.